It’s true that as we move through the decades towards retirement age, the more likely we are to have raised total cholesterol.

Bottom line: a large number of young people also have cholesterol levels that are too high and so are putting their health at risk. 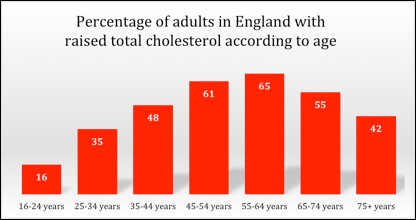 Myth 2. High cholesterol is mainly a problem for men

High cholesterol doesn’t just affect men – women are also at risk and in some cases, even more so than men! In fact, figures show that slightly more young women aged 16 to 24 years have raised total cholesterol than men of the same age.

Men then take the lead up to their mid 50s. But after the menopause and into old age, far more women than men have high total cholesterol. For example, almost three quarters – 73% – of 55 to 64 year-old women have raised total cholesterol compared with 58% of men of the same age [British Heart Foundation (2020) UK Factsheet. January 2020].

The reality: women need to be just as vigilant at getting their cholesterol levels monitored, especially after the menopause. 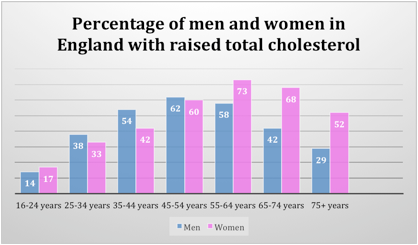 Myth 3. Only overweight and unfit people have high cholesterol

Keep young at heart through the decades of life

Women and heart health – It’s worth caring about!

We use cookies on our website to give you the most relevant experience by remembering your preferences and repeat visits. By clicking “Accept”, you consent to the use of ALL the cookies. However you may visit Cookie Settings to change consent preferences.
Manage consentACCEPT
Manage consent

Privacy policy
Strictly necessary cookies Always Enabled
These cookies are necessary for the website to function and cannot be switched off in our systems. They are usually only set in response to actions made by you which amount to a request for services, such as setting your privacy preferences, logging in or filling in forms. You can set your browser to block or alert you about these cookies, but some parts of the site will not then work. These cookies do not store any personally identifiable information.
Functional
Functional cookies help to perform certain functionalities such as sharing website content on social media platforms, collect feedbacks, remember language selections, or other third-party features.
Analytics
Analytical cookies allow us to count visits and traffic sources so we can measure and improve the performance of our site. They help us to know which pages are the most and least popular and see how visitors move around the site. All information these cookies collect is aggregated and therefore anonymous. If you do not allow these cookies we will not know when you have visited our site, and will not be able to monitor its performance.
Advertisement
These cookies may be set through our site by our advertising partners. They may be used by those companies to build a profile of your interests and show you relevant adverts on other sites. They do not store directly personal information, but are based on uniquely identifying your browser and internet device. If you do not allow these cookies, you will experience less targeted advertising.
Save & Accept